Mac vs. Windows: Should You Really Be Using a Mac for Design? 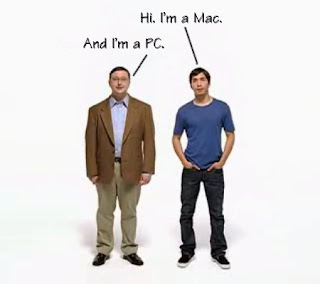 There's this thing about the design community, especially visual designers. They generally prefer to use a Mac for design work. I get it. The first time I saw my company's website on a Mac using Netscape, "Wow!"

I've always been a Windows girl, even for design work. I live in the Seattle area. What do you expect? But seriously, there's more to it than that.

My first experience with Mac versus Windows was when I was working as an office administrator in a small business with an open office and no conference room environment. My boss, the owner of the business, met multiple times with a designer to create the logo for the company and I always overheard the meeting conversations.

My boss kept telling the designer that when he sent over his mocks and she looked at them on her (Windows) computer, the colors were different than when the designer showed her his work (on his Mac). The designer was forced multiple times to look at her computer screen at the color being displayed. He tried to explain to her that it was the difference between Windows and the Mac and even then video card hardware on her computer. My boss never got it and she never trusted she was going to get the color she was seeing on his screen or printed comps. At the time, I didn't get it either. Why would they be different? Heading a startup business the last thing my boss wanted to do was pay hundreds of dollars for company stationery that wasn't going to look like she expected or convey the feel she wanted for the business.

I've carried this lesson with me from the day I started in the tech industry. Design using the computer system your user uses. Design in the minimum screen resolution your user uses and make sure it scales. You might have surprises if you don't.

According to Hongkiat, viewed 05-Aug-2021, Windows has a 91% market share of desktop computers.

According to Statista, viewed 05-Aug-20201, Android has almost a 73% market share of smart phones.

I've been told that you can now put a Windows VM onto a Mac now, so you can see what your work will look like in Windows. I haven't seen this yet and I'm pretty skeptical. I suspect that the display will still be far nicer than if you were seeing it via a Windows computer simply because of the tight hardware integration Apple has always had. There are also programs to that can calibrate your Windows video card to be 'true color.' But very, very few users do this and I would postulate that it's all designers and photographers.

Now twenty-five plus years later I see the exact same problem happening in one of my company's projects.  They hired a third-party to do visual design for it and that company's designers were working on Macs. They showed their work to the paying-for-it managers on their Macs.

The problem is that its a B2B site. So 98% of our users use Windows. The designers have selected various light shades of gray that in some cases simply don't show up on a Windows machine and dark blues between which there is almost no difference. Sure, looks great on the Mac. But we're basically aiming our best visual design towards 2% or less of our users.

So if you're working on a Mac, you really need to rethink whether you really should be. If the vast majority of your users are using Windows machines, you will never see what they're seeing, nor have the ability to adjust the design accordingly.

Design is for our users, not ourselves.

December 31, 2019
Lately I've been loaned out to another group at my company, but not just to another group. I'm having to work with a third-party consultancy helping with a consumer facing application. They had already been working on the project for over a year when I came on board. Because the consultancy's design group was lead by visual designers and they didn't ask our EUX group about our process and tools, I've been forced into using Sketch and all of its accouterments. Sketch is THE most miserable software I have ever used for enterprise UI design, followed by Abstract the version control I was forced into. I happen to be heavy-fingered on the mouse. Because of it, layers unknowingly move around on me constantly. Even when I'm aware, it can happen and I'm trying hard not let it happen. I screwed things up in a master library file royally. But I wasn't alone. 3 of the other 4 designers have done the same. Sketch is probably quite fine for small consumer produc
Post a Comment
Read more

February 22, 2017
Last week I participated in on UXPin’s Enterprise Summit (2017) . On the last day there was a panel discussion by UX gurus on the state of enterprise UX with Jeff Veen of True Ventures, Lou Rosenfeld, and Marcin Treder of UXPin and Sunita Redd of UXPin. Over and over and over I kept hearing them use the word delight. So here’s what I want to say: Dear Enterprise UX Gurus: STOP! Please stop using the word “delight” in the context of enterprise UX. Just stop. I’m not the only one who wants this . Delight is creating an emotional bond with a user through pleasurable experiences IN ORDER TO SELL THEM SOMETHING. This is wholly a consumer-side idea. Enterprise users have absolutely no choice in whether they get to use our product. It’s already been decided by management. I’m up for a replacement. I personally say I want to give the user a good day, but more importantly I’m trying to make users more efficient. I’m trying to create human capacity for the company. Yeah, it’s still
Post a Comment
Read more